Death metal is known to be one of the most extreme subgenres of heavy metal, and fans of this music take their bands very seriously. Distinct for its use of deep, aggressive, growling vocals, abrupt changes in tempo, and powerful drumming, this subgenre has been rocking fans since its origins in the mid-1980s.

Whether you’re a hardcore fan or just getting into the music scene, here are the 15 best death metal musicians that you need to know about. 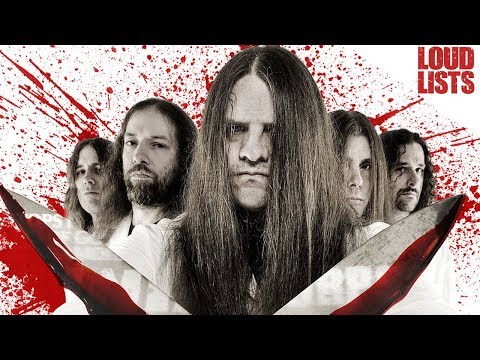 His debut album, Scream Bloody Gore, with his band Death, was released in 1987 and is largely regarded as kicking off the subgenre as a whole. It has even been described as the album that transformed thrash metal into the death metal we know today.

Schuldiner was known for his brutal vocals and his ability to produce incredible guitar riffs without missing a beat while singing. After founding Death in Altamonte, Florida, in 1984, the band quickly became one of the most noteworthy and legendary death metal bands, which has inspired numerous others who followed after. Although Chuck Schuldiner passed away in 2001, his legacy can still be heard and felt throughout much of the death metal produced today.

Guitarist of Immolation, Vigna has been rocking the death metal subgenre since 1986 and he is still going strong today. Founded in Yonkers, New York, Immolation is considered one of the leading bands in the genre, as well as one of the most well-known, due in large part to the complex riffs created by Vigna.

After having gained momentum in the late 80s in the underground metal scene, Immolation signed with Roadrunner records in 1991 to produce their debut album, Dawn of Possession. Most recently they released their 10th full-length album, Atonement, in 2017, proving that death metal never dies, it just keeps on rocking even two decades later. Although many other members have come and gone, Vigna remains one of two remaining original members, and he is largely regarded as one of the most talented death metal guitarists in history.

Christ Barnes is the founding vocalist and lyricist of Cannibal Corpse. Founding the band in 1988 in Buffalo, New York, they have released 15 albums, two box sets, two live albums, and four video albums. Although they have had little television or radio success, the cult following of this band allowed them to gain the momentum to become one of the most iconic death metal bands in the world.

This success can be contributed to Barnes’ low guttural vocals and noticeably violent lyrics that, when combined with his unique voice, helped propel the band into notoriety. However, despite having success with Cannibal Corpse, Barnes split from the group in 1995, citing personal differences. After the split, he began to focus on his other band, Six Feet Under, with which he has released 10 studio albums to date.

Hailing from Kristiansand, Norway, Ronny Thorsen is most known for his harsh vocals and his creative lyricism. Formerly, he was the most consistent member of the band Trail of Tears.

However, he split from them in 2013, going on to lend his vocal prowess to other notable bands such as Blood Red Throne and Scariot. In 2005, Thorsen placed third for Artist of the Year and Best Male Vocalist at the Napalm Awards.

Although Trail of Tears hasn’t been active recently, in 2020, Thorsen reported that the band is eager to get back into creating music, and fans are even more eager to see Thorsen’s creativity back in action. Although there is no release date for a new album when it comes out, Thorsen will no doubt stand out with his uniquely harsh vocals.

Vocalist John Tardy and his drummer brother, Donald, formed Obituary in Tampa, Florida in 1984. This band was another fundamental band during the foundation of the death metal subgenre.

Both John and his brother have been the most consistent members of the band and thus far have 10 studio albums under their belt. Obituary’s music is known for its solid drumming, heavy guitar riffs, and the growling vocals of John Tardy. In 2020, John Tardy revealed that the band was working on a new album slated for release in 2022 with a tour following.

Their last album, self-titled Obituary, was released in 2017 and it received high praise from many critics, with Ray Harmony from Terrorizer commending John Tardy’s vocals stating, “There is still nobody else in the industry able to make the monstrous vocal sounds that effortlessly ooze outta John Tardy’s mouth.” It’s fair to say that the impact that this band has had is due in large part to Tardy’s unique vocals.

Piotr Wiwczarek is a Polish vocalist and lead guitarist for the internationally renowned band Vader and he is the only consistent member to remain since its formation.

Wiwczarek is known for his raging riffs and stand-out vocals that make the sound of Vader stand out from other death metal bands. He also produced the Polish band Decapitated’s first album, Winds of Creation, in 1999, using his valuable knowledge of the industry to help the young artists release their music.

Wiwczarek is very much a staple of death metal, and between his vocal consistency and riffs, there is a lot to appreciate.

Chris Reifert is another of the greats who helped form the death metal subgenre and he was one of the first to combine the styles of doom and death metal. As a drummer for Death’s debut album, Scream Bloody Gore, Reifert ended up parting ways with Chuck Schuldiner when the latter moved back to Florida.

Instead, opting to stay in the Bay Area, Reifert went on to form his own trailblazing band, Autopsy.  In this band, he notably played drums, but also provided the vocals that helped to propel it into world-renowned success.

In addition to Autopsy, Reifert and his talents have also been involved in numerous side projects, such as The Ravenous, Violation Wound, and Doomed. While his visceral vocals and drumming often get the most praise, his album art and sharp wit during interviews are also well-known by fans.

Hailing from Sweden, Lars Mikael Akerfeldt is the lead vocalist, guitarist, and songwriter for the death metal band Opeth. Formerly, he provided vocals for the band Bloodbath until 2012, and he worked on three albums with the band.

Some regard him as being one of the best death metal vocalists, and his expert death growls contrast with a beautiful singing voice that keeps you on your toes. Akerfeldt’s vocal control that allows for this switching is impressive, and when coupled with his poetic lyrics, it’s no wonder that he has garnered so much praise. As one of the most technically impressive vocalists in death metal, Akerfeldt has certainly left his mark on the subgenre.

David Vincent, also called Evil D, is known for being the former lead bassist and vocalist for Morbid Angel. He also performed as the bassist for Genitorturers, of which his then-wife was a member of.

Fans of Vincent praise his skills as a bassist, and for his perfected death growls, which many believe have the perfect balance between high and low pitch. Vincent cites Alice Cooper and Kiss as being early influences, and many of his performances show off these inspirations. Regardless of who he performs with, Vincent is a stand-out musician that fans across the world loyally follow.

The Polish frontman of the band Behemoth, Darski is known for his vocals, lyrics, and composing skills. Having taken the name Nergal after a Babylonian deity, many of his lyrics deal with dark and demonic themes, and many were written in conjunction with Krzysztof Azarewicz, a Polish-born philosopher and occultist. This has garnered him some controversy, and In 2010, Darski was held on trial in Poland for blasphemy after having ripped a Bible on stage during a 2007 performance.

Darski argued for his artist licence and eventually, the charges were dropped. An outspoken voice for freedom of speech and expression, Darski uses his creative compositions, growling voice, and igniting lyrics to inspire his fans across the globe.

Best known for being the vocalist and rhythm guitarist for the band Gojira, Joe Duplantier is one of the most popular death metal artists today. His voice stands out from many other death metal singers, and despite its growling roughness, it is easy to understand and shout along to.

Throughout his career, Duplantier has used his musical platforms to engage his fans in environmental protection causes, which some of his lyrics reflect. Outspoken about his concern for nature, Duplantier has also shown his support for the Indigenous community with numerous fundraising efforts.

Karl Sanders serves as the guitarist and vocalist of the popular band Nile, which he founded in 1993. Notable for having an ancient Egyptian theme, Sanders has released nine studio albums to date.

Along with Egyptian inspiration, Sander’s music is also notable for its combination of traditional and technical death metal. The complexity and speed have received a lot of praise from fans and critics, along with Sander’s heavy riffs.

Hailing from Stockholm, Sweden, Hegg is the lead vocalist of the melodic death metal band Amon Amarth. Hegg is capable of capturing both melody and power in his growling vocals. Despite his rough, growling voice, his vocals are surprisingly intelligible, which makes his music a good starting point for those new to death metal, but the power behind his voice is enough to keep veteran listeners coming back for more.

Many fans credit him for his unique voice, but also the balance that he brings to his music. Usually singing tracks with Viking themes, Hegg encompasses the modern feeling of death metal with the raw power of a Viking berserker. When listening to his vocals, you’ll instantly be put in the mood to pillage and plunder.

Dan Greening, who also goes by the name Lord Worm, is the original vocalist of the band Cryptopsy. The main thing that sets Greening apart is the sheer brutal power of his vocals, which has led to some calling him the king of screams. Fans of brutal hardcore death metal often gravitate towards his music, and his guttural vocals set him apart from any other.

Another thing that sets Greening apart from other death metal singers is that he is also an English teacher, who teaches English as a Second Language to native French speakers. Although he keeps his music and teaching lives separate, it is a surprising fact that many people wouldn’t know by just listening to his incredible heavy vocal prowess.

Another Swedish metal artist, Mikael Stanne, is the lyricist and vocalist of the melodic death metal band Dark Tranquility. However, he was previously the vocalist for the well-known power metal group HammerFall.

One of the most remarkable things about Stanne is his ability to somehow sound gentle and brutal at the same time, something that makes his voice unique from many other death metal vocalists. Between his growls, screams, and clean vocals, his voice lends itself to some of the most atmospheric death metal in the subgenre. With a notable rasp, this baritone is truly one of the most unique musicians to grace death metal fans’ playlists.