This list had to leave off many, many, worthwhile electronic musicians. We didn’t have room for the amazing career of Mort Garson or the modern machinations of artists as diverse as Future. However, we truly believe that each of these artists is worth your time.

We ranked them based not on quality but on chronological order. In this way, you can get an idea of the development and expansion of this form. 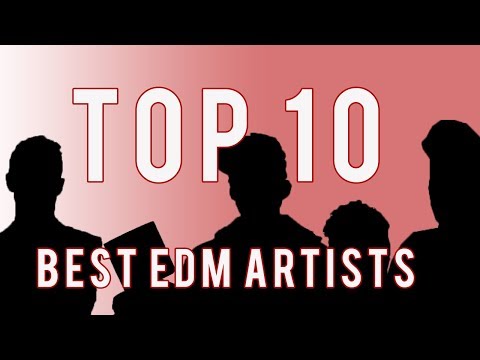 While Theremin was more of an inventor than a musician, no list of electronic musicians can leave him out. He invented the Theremin musical instrument, a unique item that uses closed connections and amplifies to produce a fascinating sound. It’s also a hands-free instrument, meaning that you don’t touch it but wave your arms around its two poles to produce eerie and unsettling sounds.

Varese was one of the most radical composers of his time and had moved beyond acoustic instruments when he started using electronic ones. He integrated things like the previously mentioned Theremin, noise amplifiers, oscillators, and even sirens to produce unique textures. Fans of later electronic music may not recognize his style, but it just shows how diverse this genre is throughout history.

Though El-Dabh’s name isn’t commonly thrown around the electronic world, he is known for recording an ancient Zaar ceremony in his native Egypt and processing it with electronic echo, reverberation, and more. This style is known as electroacoustic, as it takes acoustic-created sounds and integrates them with electronic manipulation. This later led to other types of unique musical experimentation.

Schaeffer’s innovations centered around recording various types of sounds and manipulating them with speed variation, tape splicing, and much more. This art form consists of pure sound and is very electronic in nature. The eerie sounds produced by Schaeffer and his later protege, Pierre Henry, helped lay the groundwork for some deeper dives into this medium.

Stockhausen was a superlative composer, theorist, and teacher, who experimented with electronic sounds for decades. He brought a composer’s sensibility to the form, worked with tapes and electronic sources, and even published the first electronic score of all time. His continued innovations and skills as a teacher helped to spread electronic music far beyond its initial academic appeal.

Few composers and theorists are as influential as John Cage. He pioneered many interesting “Imaginary Landscapes” using electronic forms, such as magnetic tape.

He helped inspire artists like David Tudor and Morton Feldman, who later expanded electronic music themselves. Feldman, in particular, was skilled at creating fascinating electronic art that remains listenable today.

The soundtrack helps contribute to the otherworldly feel of the movie. And all sci-fi scores with electronic music follow in this film’s footsteps.

For decades, electronic music was primarily an academic pursuit, one that saw skilled technicians and composers create unique methods for each score. However, inventor and composer Robert Moog created his pioneering Moog synthesizer to help make electronic music more accessible. His keyboard-based design is still the model for most modern synthesizers and revolutionized the form.

Composer Wendy Carlos worked alongside Robert Moog and engineer Rachel Elkind to produce “Switched on Bach,” a surprise hit record. This album featured Carlos layering hundreds of synthesizer overdubs to produce some of the best renderings of Bach music of all time. Carlos later scored movies like “Tron” and pioneered just intonation and other unique electronic concepts.

These two artists are paired here because they produced music that was similar in effect, tone, and purpose. They used an almost entirely synthesized palate (combined with drums, guitars, and bass) to create rich and lengthy sonic explorations. Tangerine Dream in particular scored many films, such as “Legend,” and helped to bring electronic music even further into the home.

Anyone who’s watched Doctor Who or BBC series during the 60s and 70s have heard Derbyshire’s fascinating electronic work. Unheralded at the time for her work, she is now respected as an important innovator. Her talents helped the all-electronic rock band, “White Noise” stand out, as they later came to be used in many soundtracks and movies of the 60s and 70s.

Many of the most important electronic musicians in the early period were female. And Laurie Spiegel is one of the most unique.

She worked with the Buchla synthesizer, an instrument that used no keyboards and relied entirely on knobs and patches. She also combined her love of Appalachian music with electronic sororities to produce a variety of unique sounds and tones.

Suzanne Ciani was once thought of primarily as a New Age musician, a style she helped pioneer with her work “Seven Waves.” However, Ciani was also an early innovator of commercial electronics, providing sound effects for pinball machines and advertisements. Like Spiegel, she primarily plays the Buchla, and now performs extensive and exploratory Buchla concerts for huge audiences.

All EDM owes its existence to Kraftwerk. Starting out as an improvisational band with guitar and flute, Kraftwerk evolved into an entirely electronic band that featured streamlined beats and extensive melodies and harmonies. This simplification of their sound revolutionized music and can be traced to literally thousands of bands after. Without Kraftwerk, modern music would not exist.

For most of his career, Moroder was known as the composing and production genius behind Donna Summers. However, he also pioneered electronic dance music with Summers “I Feel Love,” the first major dance hit composed primarily on synthesizer. Moroder later scored many movies, produced even more dance hits, and has had a career renaissance as a man well into his 70s.

16. The Human League: Bringing Electronic Even More Into the Pop Realm

Synthesizers were mostly considered an artsy addition to modern music, even with the success of Kraftwerk. Even that band was mostly cold and distant and not too welcoming.

The Human League started their career as a Kraftwerk clone and later turned their all-synthesizer sound into a huge pop success. Their strong songwriting helped to make electronic music more acceptable to modern audiences.

While bands like Throbbing Gristle and Coil helped pioneer repetitive and hard-hitting styles like industrial, Depeche Mode and Erasure took those lessons and made them more pop. Both bands were connected by many of the same members and remain popular and innovative over 40 years since their debut. Their continued success shows that electronic music remains a vital force.

During the mid-to-late 80s, it was impossible to turn on the radio and not hear a Genesis song. Originally a progressive rock band, they later matured into a synthesizer-led band with a sense of experimentation, pop smarts, and instrumental strength. Their superior musicianship helped show that synth-led bands didn’t have to rely on simplicity or basic music to survive and even thrive.

When Joy Division’s singer Ian Curtis took his own life at a tragically young age, the band likely thought their career was over. However, they changed their name to New Order and focused on electronic textures instead.

Their dense and busy arrangements brought a richness to electronic pop that was often lacking. In this way, they helped pioneer many modern electronic production methods.

While Jarre looks a bit like a French model, this skilled composer and player has continually innovated in electronic music. His classic “Oxygene” was a major hit, bringing electronic textures to the home. Even now, Jarre puts out interesting and thoughtful albums, using his training as a composer to expand the form’s harmonic and compositional boundaries.

When Talk Talk debuted in the early 80s, they were one of many bands pushing a synthesizer-led style known as New Romantic. However, their last few albums combined a free-wheeling improvisational approach with the tortured and meaningful vocals of songwriter Mark Hollis. This fascinating approach is now called post-rock and is one of the most influential electronic styles in recent history.

Centered around keyboardist and singer Annie Lennox and producer, keyboardist, and guitarist Dave Stewart, Eurythmics progressed through artsty rock, minimal art synth pop, and soulful synth rock. Annie Lennox’s powerful and diverse voice brought a humanity to the style that grounded their music. And their songwriting acumen helped take them to the charts many, many times.

While Brian Eno started his career playing synthesizer with Roxy Music in the early 70s, he created a unique style of rock and later helped produce fantastic ambient albums by himself. Later, he produced bands as diverse as David Bowie, Talking Heads, and U2, taking a hands-on approach that transformed their styles and helped make them some of the most celebrated artists of their era.

Big beat electronic music started in the 90s and featured artists like Fatboy Slim and many more. However, the Chemical Brothers were the first and best to take this approach.

They combined deep electronics, psychedelic textures, diverse singers, and a humorous lyrical approach. Their albums are some of the most treasured of the era and remain endlessly listenable even today.

Richard D. James is often bemused by the label “intelligent dance music,” but it’s hard to listen to his music and call it anything else. Deeply experimental but always listenable, Aphex Twin includes prepared piano work, rich ambient tones, heavy beats, and abrasive textures. While not everything is always good, Richard D. James remains an important and vital force in electronic music.

Squarepusher is Tom Jenkinsho, a skilled jazz bass player who combines intense drum beats, his own live bass playing, and dense jazz harmonics. His work continually adds musicianship to the form, attempting to push the boundaries of electronic experimentation and composition. Often compared to Aphex Twin unfairly, Squarepusher is a unique and always interesting force in electronic music.

The French duo Daft Punk didn’t release a lot of music before they broke up. But they made each album count by creating unique statements with each. Whether they were pushing dance music into new realms, repopularizing disco, creating robot rock, scoring sci-fi movies, or producing modern AOR masterpieces, Daft Punk was always unpredictable and worth a listen.

EDM or electronic dance music remains a popular and vital force in the music world. And few do it better than DeadMau5 (pronounced “dead mouse.”)

Through his elaborate albums and concerts, Joel Thomas Zimmerman continues to expand electronic music and increase its popularity. It is fair to say that he is the most popular electronic musician of the modern era.