Music has made an impact and touched the lives of so many. Music has the ability to touch you and speak to your soul. It is often the one constant in life that never lets you down.

It is timeless, and most often, it does not matter when the music was created because it stays with you forever.

Pop music has been blazing trails for generations. Some of the best pop musicians have paved the path and led the way for the musicians of today and tomorrow.

Pop music describes the popular music of an era. Check out this list of the 18 best pop musicians. 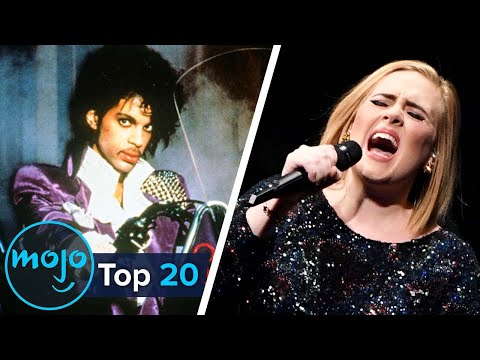 The Beatles were an English band that many consider to be one of the most influential bands in popular music history. The Beatles had an impact on the youth and counterculture of their time. In the early day of their career, The Beatles were influenced by Elvis and Buddy Holly.

As time passed, their music had more of a rock sound to it, but they were popular and fall under pop as a result. The Beatles recorded 71 Top Hot 100 songs throughout their career.

Madonna has often been called the Queen of Pop because she is considered one of the most influential musical figures in pop culture. Madonna has spent her career reinventing herself and her songwriting, music production, and presentation are incredibly versatile.

Madonna’s career has spanned 40 years and includes 14 albums and 57 Top Hot 100 songs. Madonna is a singer, dancer, and actress and always had the philosophy that her videos were the best way to reach her fans.

Elton John is a British pianist, composer, and singer that has been entertaining audiences for over 50 years. Elton John was one of the most popular entertainers in the late 20th century. Elton John’s music is unmistakable with his poetic lyrics and piano playing.

Michael Jackson has frequently been hailed as the King of Pop because not only did he break many records, but he overcame racial boundaries while revolutionizing the music industry. Michael Jackson was legendary and changed the traditional production and pattern of songs.

His musical catalog contained a series of albums, 13 Number 1 singles on the Billboard Hot 100, and 51 Top Hot 100 songs. Michael Jackson is the most award-winning artist of all time despite having passed away several years ago.

Even though Elvis could not write or read music, he came by his skills naturally. Elvis could hear a song and then pick up an instrument and play what he heard.

Mariah Carey has had 19 Number One hits on the Billboard Hot 100 over the course of three decades. Mariah is well known for her amazing voice that has a five-octave vocal range. She has been called the Queen of Christmas and Songbird Supreme.

Not only is Mariah an actress and a singer, but she is also a songwriter, and she penned 18 of those chart-topping hits.

Stevie Wonder lost his sight when he was a newborn, but he had a vision that no one else had. He was a piano prodigy and signed a record deal at age 11. Stevie Wonder became one of the most influential musicians of the 20th century.

Stevie Wonder is a songwriter, as well as a singer and record producer, who created a unique blend of soul, gospel, and rhythm and blues. Stevie Wonder is a pop music icon as has inspired generations and still continues to have an impact today.

Whitney Houston had one of the most distinct and powerful voices in pop music and was able to connect with fans like no one had before her. Whitney Houston was the first musician to have seven number one hits consecutively.

Whitney Houston was the first female to enter the Billboard 200 at the Number One spot and had a total of 40 Hot 100 songs. Whitney Houston also had the longest running number one single on the Hot 100 and will always be known for her version of “I Will Always Love You.”

There was a time when Janet Jackson was only known as Michael’s little sister. That was before she stood out as one of the most creative females in pop music. Janet Jackson is a singer and an actress with a career spanning many decades starting in the 1980s.

Janet created a solid place for herself in the dance pop arena in the 1980s and 1990s. Janet had five number one albums on the Billboard 200 and 41 Hot 100 songs. Janet Jackson was inducted into the Rock and Roll Hall of Fame in 2019.

Rihanna is a Barbadian pop and rhythm and blues singer who burst on the music scene in the early 2000s. Rihanna became a star worldwide in the early 21st century. Rihanna has a distinct voice and style that exudes strong confidence.

In addition to being a singer, Rihanna is a philanthropist, actress, and entrepreneur. Rihanna has had 62 Hot 100 songs and is the founder and CEO of Fenty Beauty company and fashion house.

Prince is a legendary performer and one of the most famous pioneers of pop music of the 20th century. Prince mixed pop, new wave, funk, and rock together to create music that gained fans around the world. Prince received seven Grammy Awards, 19 Top 10 hits on the Billboard Hot 100 and 47 Hot 100 songs.

Billy Joel is a singer, songwriter, composer, and pianist. Billy Joel’s career started in the early 1960s, and even though he is not writing any new pop music, he is still performing today. Billy Joel is still filling up large venues like Madison Square Garden.

Much of his music is the traditional pop ballad, but there is always a story behind it. Over his career, Billy Joel has piled up numerous Top 10 Hits and 42 Hot 100 songs.

Phil Collins became one of the most unlikely successful pop musicians in the 1980s. Phil Collins became the face of the band Genesis after replacing Peter Gabriel in the mid-70s. Then, starting in the early 1980s, Phil Collins went out on his own and had a massive solo career that included 13 Top Ten Hits in the US.

Phil Collins also had 7 Number One Hits on the Billboard Hot 100 and 27 Hot 100 songs. Phil Collins plays both the piano and the drums.

Phil Collins created a new and different sound by accident in the 80s by incorporating a noise gate into the recording equipment. This cut recorded sounds off shortly after they started with creating a new bright percussion sound.

While Taylor Swift started as a country music artist, her second album made its appearance on the pop charts, and she has been there ever since. It was not until 2014 and her 5th album that Taylor said she was officially releasing a pop album. Despite her roots in country music, Taylor Swift has been winning over pop fans for years.

While the lines of music genres have become blurred over the years, Taylor Swift has helped to blur them even more. She has won 68 BMI Awards, 11 Grammy Awards, 3 Albums of the Year, and 25 Billboard Music Awards, just to name a few. Taylor speaks to her audience of young adults because her songs mainly revolve around romance and heartbreak.

While Barbra Streisand has crossed over many genres, she holds her place in the pop music world. Barbra Streisand is a singer, composer, writer, director, producer, and actress. Many consider her to be the greatest pop singer of her generation.

She redefined everything when she made her debut in the 1960s. Barbra Streisand’s career has spanned over six decades, and she is still creating music. Barbra Streisand is outspoken and has become one of the most powerful and influential women in show business.

Barbra Streisand has performed on Broadway, received a Kennedy Center Honor in 2008 and the Presidential Medal of Freedom in 2015. In addition, she won numerous Grammy Awards and Golden Globes.

He has been releasing his own records since 1973. Bruce Springsteen is best known for his own version of heartland rock fused with pop heavily covered with poetic lyrics. His own E Street Band has been his primary band since his start.

Even though Alicia Keys is best known for her blend of classic rhythm and blues and soul, she is also a pop artist. She entered the charts in 2001 with her debut that made the world stand up and take notice. Alicia Keys is a classically trained pianist, singer, and songwriter.

Alicia Keys began performing at age 4, playing the piano at age 7, and composing music by age 14. She is socially conscious and aware, and that is displayed in her lyrics.

She is also an actress and has taken on roles that explore social issues. Alicia Keys won four Grammy Awards in 2005, has had 26 Hot 100 songs, and is considered one of the greatest R&B singers of her generation.

Justin Bieber is a Canadian pop star that sparked a craze when he burst on the scene in 2009. Justin Bieber was a fresh-faced teen, and he attracted many teen fans. Justin Bieber’s pop songs were catchy, and his debut album broke records when it launched on the Billboard 200, making Justin Bieber the youngest solo male act to top the charts in almost 50 years.

Justin Bieber has had a series of albums, four of which were produced in 2020 alone. He plays drums, piano, guitar, and keyboard. Justin Bieber has grown up publicly and made some mistakes along the way.