Like any musical genre, rap music has drastically evolved over the years. It was not until the 1970s that rap music began to make its way into mainstream radio. Much of the early rap music consisted of hip-hop beats and turntables along with rhymes about living in the Black community.

Particularly in Atlanta, Georgia. Artists such as Young Jeezy, Gucci Mane, and T.I. are considered to have sparked this movement in the rap scene. In 2003, T.I. coined the name of the rap genre with his album Trap Musik.

However, trap music is not exclusive to one community anymore. It is a widespread movement that has paved and will continue to pave the way for great trap artists. 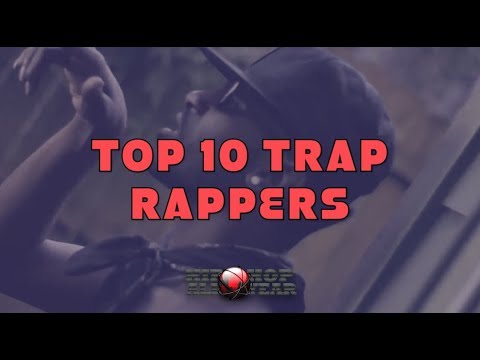 What is Trap Music?

Trap music is a subset of the rap genre that contains, much like other rap music, lyrical content centralized around gangs, guns, money, material objects, urban life, violence, drugs, sex, and other related content. The term “trap” is derived from southern “trap houses” where clandestine activity occurs, usually drug deals and use.

Trap music can be defined by its distinctive characterization of synthesized drums, tuned drums with a long decay, and its complex hi-hat patterns. Usually, the only instrument used is the snare drums and double or triple-timed hi-hats.

Many producers and rap artists have learned to use this form of rap and make it into something substantial. Something that has influenced not only rap music but of all genres of music, including R&B, pop, reggaeton, and even K-pop. Let’s look at the top 15 trap rap artists listed below.

Lil Uzi Vert, otherwise known as Symere Bysil Woods is a mainstream trap musician from Philadelphia. He is known for his many facial tattoos, facial piercings, and unique fashion. In 2015, Lil Uzi Vert emerged onto the rap scene when his mixtape Luv is Rage gained positive reception, leading to a recording contract with Atlantic Records.

It wasn’t until 2016 when his debut single “Money Longer” led him to mainstream stardom. He released two mixtapes in 2016 and 2017, in which he worked with Gucci Mane. He eventually reached the Billboard Hot 100.

His single “XO Tour Llif3” won the MTV Video Music Award for Song of Summer. In 2017, Lil Uzi Vert released his debut album Luv is Rage 2. The debut album was well-received by critics and fans, which led to the number one spot on the Billboard 200 and a certified double platinum by the Recording Industry Association of America (RIAA).

Chief Keef, coming straight from Chicago, made his way into the trap music industry in 2010-2011 when he introduced his mixtapes, The Glory Road and Bang, to his South Side community. Keef’s song “I Don’t Like” led him to major rap industry artists such as Kanye West, Big Sean, and Jada Kiss. In 2012, he signed a recording contract with Interscope Records.

In December 2012, his debut album Finally Rich reached number twenty-nine on the Billboard 200. Many rap artists such as 50 cent, Wiz Khalifa, Rick Ross, Master P, Lil Reese, and French Montana collaborated with Chief Keef on his album. Chief Keef has had his fair share of legal issues, but he continues to produce some of the best trap music in the industry today.

King Von paved his way into the trap music scene after Lil Durk signed him to Only the Family label in 2018, the same year he released his first single “Crazy Story”. In 2019, King Von released a single “Crazy Story 2.0” featuring Lil Durk, which reached number four on the Bubbling Under Hot 100 chart.

In September 2019, King Von debuted his album Grandson, Vol. 1, which made number 75 on the Billboard 200 and number 27 on the Hip Hop/R&B albums chart. His single “Took Her to the O” reached number 63 on Billboard 200. Unfortunately, King Von died in November 2020 in an altercation outside of a nightclub in Atlanta.

Migos is a trap music group of three rappers: Quavo, Offset, and Takeoff. They emerged into the hip-hop scene in 2008, but it wasn’t until 2013 that their commercial debut single “Versace” caught the eye of trap music fans which was a track on their mixtape Y.R.N. (Young Rich Niggas). They have had several singles that peaked in Billboard Hot 100 and MotorSport.

Under the labels Quality Control Music and 300 Entertainment, Migos released their debut album Yung Rich Nation. Some of their most popular songs include “Fight Night”, “Look at My Dab”, “Bad and Boujee”, “Stir Fry”, and “Walk It Talk It” featuring Drake. Migos continues to produce quality trap music with their Culture album trilogy.

Nayvadius DeMun Wilburn sounds like a name of royalty and stature. But his fans know him as Future. He was born and raised in Atlanta, Georgia, where trap music first emerged.

Future began his musical career as a part of the Dungeon Family collective. Between 2010 and 2011, he released many mixtapes which led him to a record label deal with Epic Records and Rocko’s A1 Recordings. This helped him establish his own label Freebandz.

In 2012, Future debuted his album Pluto, and was met with a positive reception by critics and fans alike. He has worked with other rap artists such as Lil Wayne, Kanye West, Drake, Andre 3000, and R&B artist Rhianna. In 2016, he appeared in Rolling Stone magazine. Future has a bright FUTURE ahead of him in the trap music industry.

Travis Scott first appeared in the trap music industry in 2012 when he signed a recording contract with Epic Records. Following later that year in November, Scott received another publishing contract with Kanye West’s GOOD Music, in the production of Very GOOD Beats. The following year T.I. signed Scott to his recording label Grand Hustle imprint.

In 2015, Scott released his debut studio album Rodeo, which received platinum awarded by the RIAA in 2017. He reached the Billboard 200 in his second album Birds in the Trap Sing McKnight. Scott has since been nominated for seven Grammy Awards but has won many other awards in other music or entertainment award ceremonies, including a Latin Grammy award.

Shoreline Mafia is fairly new to the trap music industry. Nonetheless, they have made waves not only in Los Angeles but across the U.S. The rap group is comprised of four rappers: OhGeesy, Rob Vicious, Fenix Flexin, and Master Kato.

The group formed in 2016, and in 2018 they signed a recording deal with Atlantic Records. They have released several mixtapes, including ShorlineDoThatShit, Traplantic, OTXmas, Party Pack, and Party Pack 2. In 2020, Shoreline Mafia released their first studio album Mafia Bidniss.

In April 2020, Rob Vicious stated he would be leaving the rap group. Nonetheless, OhGeesy, Fenix Flexin, and Master Kato are talented trap artists on the rise.

6ix9ine, also known as Tekashi69 has dominated the trap music industry with his controversial public image and his eccentric dress and persona. Sporting rainbow-colored hair and an abundant number of facial tattoos, he has created a public image that sparked flavor in his music. In 2017, 6ix9ine released his debut single “Gummo”, which was initially met with unfavorable reception, but gained popularity later.

In 2018, he released his mixtape Day 69, which contained three singles (“Kooda”, “Keke”, and “Gotti”), which reached the charts of the Billboard Hot 100. 6ix9ine released his debut album Dummy Boy in 2018. The album was met with a negative critical review but still managed to earn certified platinum by the RIAA.

6ix9ine is also known for the many criminal charges against him, including the use of a child in a sexual performance, racketeering, weapons and drug charges, conspiracy to commit murder, and armed robbery. Because he testified against the others charged, he was sentenced to two years in prison.

However, due to the COVID-19 pandemic, he was released to be placed on house arrest. Since his release, he has continued to make music.

2 Chainz is one of the rap artists to come from Georgia, the birthplace of trap music. He quickly gained notice in the rap community because of his Southern rap style in the duo Playaz Circle. His longtime friend Earl “Dolla Boy” Conyers comprised the other half of the duo.

Ludacris took notice and signed them to his label, Disturbing tha Peace. In 2012, 2 Chainz was offered and signed a recording deal with Def Jam Recordings, a subsidiary of Universal Music Group. However, his debut album Based on a T.R.U. Story received a negative critical review but still managed to do well commercially.

The album produced three singles (“No lie ft. Drake, “Birthday Song ft. Kanye West, and “I’m Different”), which reached the top 50 of the Billboard Hot 100 and received Gold or a higher award by the RIAA. He has won and been nominated for several music awards.

In the late 2010s, Trippie Redd gained popularity in trap music through SoundCloud. But it wasn’t until 2017 when his single “Love Scars” from his debut mixtape A Love Letter to You made waves in the mainstream rap scene. Redd reached the Billboard Hot 100 with his singles “Dark Knight Dummo”, “Taking a Walk”, and “Topanga”.

His debut studio and second album both obtained the top five of the Billboard 200. His mixtapes received positive reception and topped charts. Redd’s third studio album Pegasus may be considered his most critically acclaimed album, as it reached number two on the Billboard 200.

Lil Pump gained popularity on SoundCloud and soon became one of the best-known artists on the platform. His music has caused public controversy over his overt promotion of Xanax, Lean, and Marijuana. However, that did not hinder Lil Pump from gaining the number 3 on the Billboard Hot 100 and RIAA certified five-times platinum for his hit single “Gucci Gang” in 2017.

21 Savage was born in London, but he moved to Atlanta at age seven. In 2015, he released his mixtape The Slaughter Tape, which garnished some attention from the young rapper. In 2016, 21 Savage released an EP Savage Mode, with producer Metro Boomin.

The EP contained the hit singles “X” ft. Future, “No Heart”. His talent was noticed, and he was featured in Drake’s single “Sneakin’” and Post Malone’s “Rockstar”. In 2017, 21 Savage released his debut album Issa Album, which made number 2 on the U.S. Billboard 200.

The track “Bank Account” became his first top 20 single on the Billboard Hot 100. In 2018, he released his second studio album I am>I was, which debuted at number one on the Billboard 200. He has since been nominated for 18 awards and has won 3.

The Future of Trap Music

Trap Music is rapidly growing throughout the rap industry. The pioneers of Hip-Hop would be amazed at the evolution of the genre they created. While this article only lists 12 of the best trap rap artists, several others deserve a spot there. And there will be several more as new rap artists emerge as the genre continues to grow.